There are Bollywood celebrities with great cars and bikes. But not everyone has a deep and versatile taste in both cars and bikes like John Abraham. The actor is known for his ‘need for speed’ and great collection of automobiles. Movies like Dhoom introduced the bike and car culture to Bollywood and John played a big part in that.

Also not mentioned in the list but is coming soon to his collection is the Nissan Patrol. John is Nissan’s brand ambassador in India

Here are some of the cars and bikes owned by the actor, John Abraham: 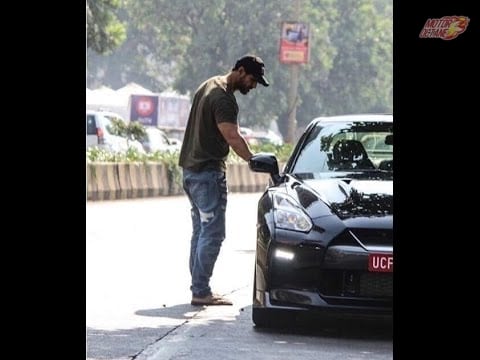 The Black edition GTR is the car that supposedly replaced the Lamborghini Gallardo in the actor’s garage. The V6, all-wheel drive monster is a really fast car and could be the weapon that John uses to break the 300km/h record he wants to break. This is the kind of car that one does not expect to see often in a Bollywood stars fleet. But John is not any other Bollywood star. He is a enthusiast after all. His petrol Gypsy can be seen across the suburbs and on the highway often. He is an enthusiast and a actor. So when John needs to step out as an actor, he needs a good set of wheels. This is where the Q7 comes in. The Audi Q7 is the car when John has to go to parties and event or has friends and family with him. The car is an excellent choice for this kind of work. This bike has its own tale. The RD350 in John’s garage is his first bike ever that he purchased for Rs 17,000. It is a bike that has been constantly in his garage. He will most probably never sell that bike. John Abraham is also the brand ambassador of Yamaha in India. John Abraham’s first ever bike was a Yamaha RD350. His next big Yamaha was priced was gifted to him by Yamaha Motor India when he became their brand ambassador. The R1 is one hell of a bike. This bike track focused and also well put together to attack the street too. It can do 0-100 in under 3 seconds. The bike that for a while was the bedroom wall poster for us all, the VMax. This was a bike with a lot the attributes of a street bike and the design of a crusier. It was a bike that came into the actors garage after he had to part with his beloved Hayabusa because of contractual obligations