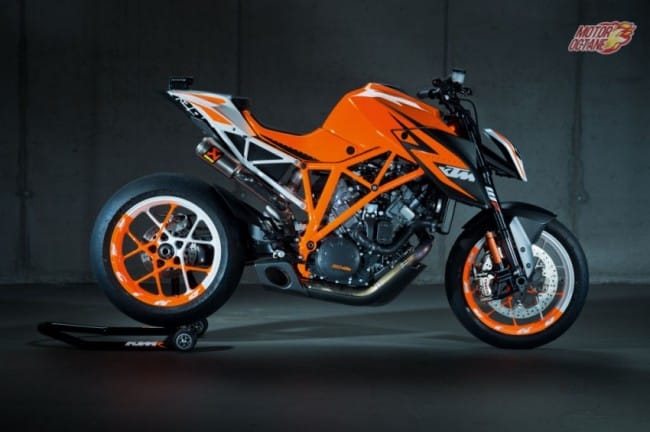 KTM is expanding its product portfolio in India and a company’s channel partner, who refused to discontinue his identity, has confirmed that KTM will be introducing the 1290 Super Duke R by the end of 2015. The Super Duke has a two-cylinder four-stroke 1301cc engine that generates 177bhp of power and weighs only 179 kilograms. The bike has an 18-litre tank and a good clearance too of 140mm. Expect the bike to come in to India as a complete body unit, at least initially. As there is no need for an ARAI certification (for bikes above 800cc), KTM will commence importing the bike immediately. We predict the Super Duke R to be launched around Diwali, as this is the time when many people take deliveries. The price of the Super Duke should be about Rs 12-14 lakhs (on-road price). KTM will be filling the gap between the 390 and 1290 and reaching out to the mid-sized premium bike buyers too.

The Super Duke R is a naked bike, like other Dukes and its styling is very aggressive. In the form of the 1290 SUPER DUKE R, KTM has crowned its legendary Naked Bike model range with a machine that redefines the term ‘Streetfighter’. One look at its impressive performance data and aggressive design is enough to see that the 1290 R is the most extreme Super Duke ever.

KTM is also looking at introducing its off-road bikes in India. KTM will be expanding its product range, it already has four bikes, two RCs and two Dukes at the moment.