The hatchback segment has seen a major growth. There are so many cars that overlap from different segments and have similar pricing. This is what makes buyers consider them too. The confusion to buy a smaller car with more features or a bigger car with more space and lesser features. This will always be a confusion and doubts always. We do a detailed comparison of the Renault Kwid vs Tata Tiago.

Renault has built the Kwid, which makes it look like a bigger car. It has SUV like stance, it is bigger than the competition. While its pricing is almost the same like the Alto and the Eon. At the same time, there is the Tata Tiago, which is a conventional hatchback but has been priced aggressively. This is what differentiates the two, but there is a price point where the two overlap and this is what creates the confusion. There are many who are considering this and aren’t able to make up on a decision. If you are one of these then this review is for you. If you are more comfortable with Hindi, then we also have a video on it. Lets begin with the Kwid. This is a hatchback that has butchy looks. It gets high ground clearance, body cladding and several other bits that make it look like a small SUV. At least it does seem to be tough looking, and a lot more appealing than the other entry-level cars. This is what makes it look different. Metro cities and the younger audience do find this as a better option and at the price it is offered it is very tempting to consider. Now, in terms of dimensions, it is a tad longer than the best-seller in this segment, the Alto. It is taller and even has more customisation options too. So, a better package to opt for, who are willing to experiment. Moving on to the Tata Tiago. This is hatchback will not turn around many heads. It is just a plain Jane looking hatchback. But what appeals in it, are its colours. The Berry Red, Blues, Orange and even the white. The car does stand out in the crowd due to its colours, which make it look premium and richer in styling. There are many who need a good looking hatchback, which isn’t very loud and it melds into the regular car traffic. That is what exactly the Tiago does. So, both the products have so much difference in the design aspect. On the inside, the Kwid looks spacious. The first thing that will attract you is the touchscreen and the digital speedometer. This are two of the main USPs of this car. At the same time, the design is simple and subtle and this makes it stand out too. The black interiors on the Kwid are appealing and they have good enough charm to it. There are rectangular AC vents, which could have been of better plastic quality. There is manual AC and even power window switches are on the centre console. It is there only for the front windows. The touchscreen system has navigation and bluetooth but only two speakers. There is more than sufficient storage space too, and the door pocket can hold at least 3 bottles. On the other hand, the interiors on the Tiago shout out good quality. The fit and finish and touch and feel of the plastics is top notch. It does feel better than the Bolt and the Zest also. The dual tone interiors consist of black and grey tones. The Harman music system is one of the main highlights, with four speakers and four tweeters. The steering wheel has audio controls and AC has manually adjustable knobs, no automatic climate control system. The Kwid does appear to be larger, but when you see the two, it isn’t that spacious. To begin with, the Kwid has decent amount of space at the front. There is more than sufficient room even for tall people. The seat support is just fine, and not worth a praise. The head rests are fixed for both the rows. Rear seats do not have too much knee room for tall people. It is better than the segment though. Then the boot space at 300 litres is the biggest in its segment and in fact even bigger than the cars a segment above. 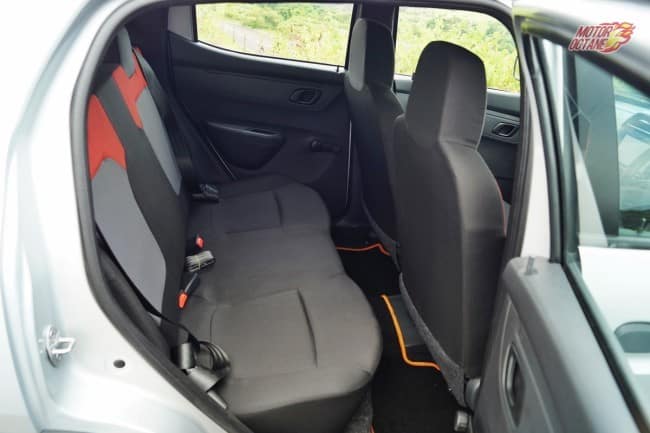 The Tiago has good amount of space. The front seats are large and extremely comfortable. The head restraint has also been well designed and it looks sporty. The side support too of the side is good and better than other Tata passengers cars. The rear seems to be cramped until you go back and sit. There is more than sufficient space and this makes it a lot easier and comfortable. There is ample of knee room and even the head room is good. Tiago’s boot isn’t as large as the Kwid, but it is sufficient for a family. The access to the boot is poor as the loading lip is high. The Kwid 800cc is small and cannot be compared to the Tiago. So, we will compare the 1.0-litre engine. This engine is noisy when you start it and it does seem to be more like a diesel engine. The power of this engine is good and there is lesser noise when the car starts moving. There is very minimal vibrations and the engine has good enough grunt. Driving in city or the highway is easy. One will not struggle with power to overtake. At the same time, the Kwid’s AMT is smooth and has good pull too. If you need a comfortable drive, then the Kwid AMT does a good job.

At the same time, Tiago’s 1.2-litre petrol has seen an improvement in its refinement. The engine is now a lot more smoother and very little noise is there. The Tiago cabin is quieter than the Kwid. At the same time, the power of the Tiago is also good. There are driving modes too, and this is where the Tiago has an advantage on the Kwid. The AMT is refined but the driving pleasure is better on the Kwid AMT. Still the Tiago has a lot of more advantages to it.

Both of them have good driving dynamics. Be it ride quality or even the handling. For a car of this size, the ride is sorted and a lot better than the competition and even cars that are a segment above. Now, even though these cars are built for daily driving, they do well in terms of dynamics. The steering feel and feedback too is good on the Kwid and the Tiago. 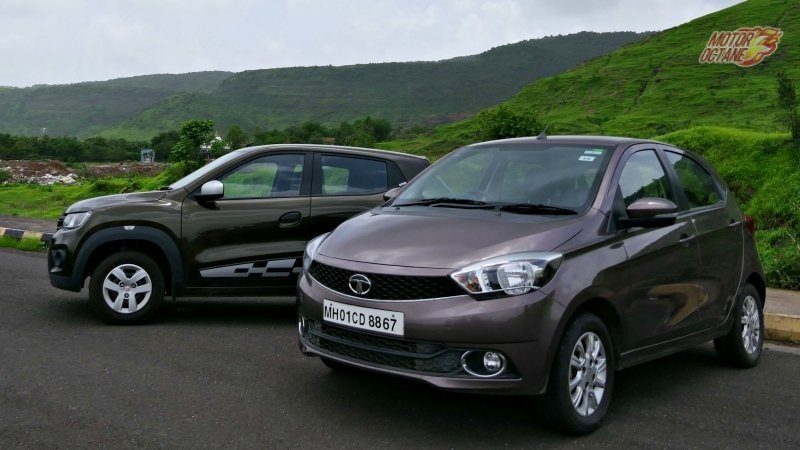 Renault Kwid vs Tata Tiago – Which to buy?

If you have a budget for a top end Kwid 1.0 then the Tiago XZ is out of the range. So, you should pick up the Tiago XM, which has better build, space, quality, engine power and even some more features. There isn’t a major difference in the price of the RxT(O) and XM(O). So, the Tiago is the clear choice. Then if you can afford a Tiago XZ then you shouldn’t even consider the Kwid. If you are looking at a lower model on the Kwid 1.0, then just pick the 800cc Kwid RxT (O). Hope this answers all your queries. 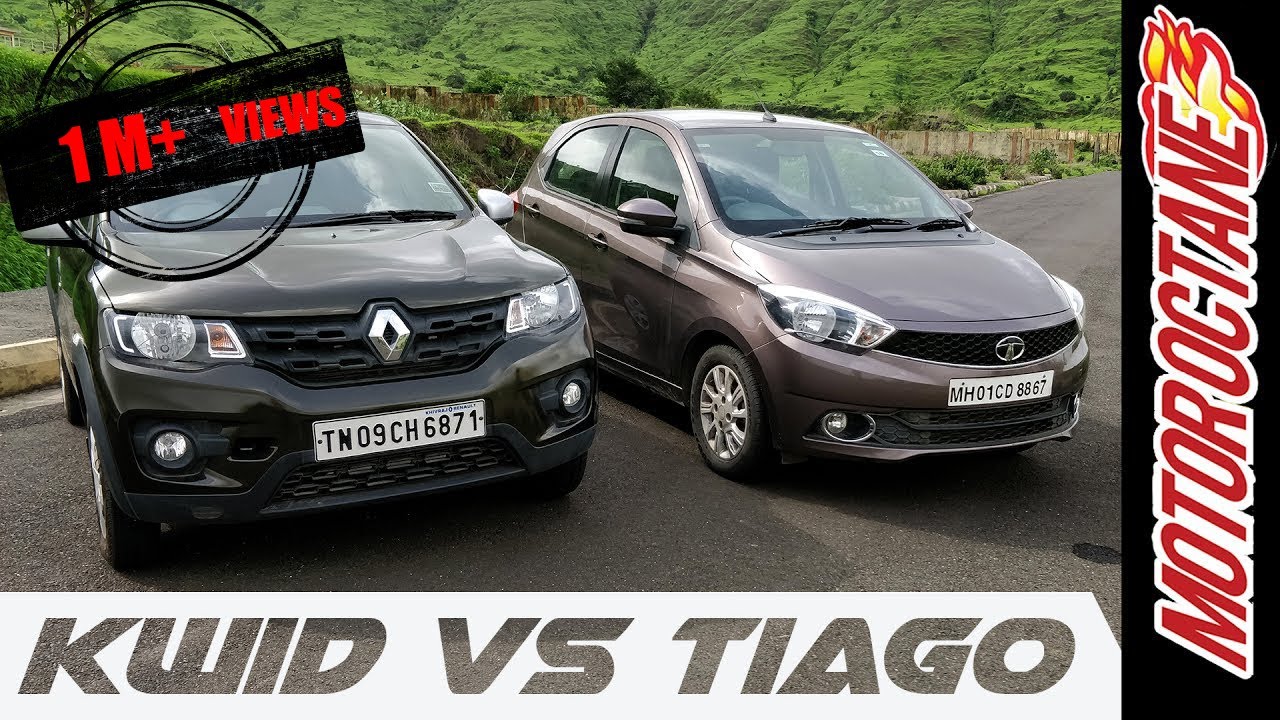