Hyundai has been doing what very few car companies have been doing and has also tasted the kind of success what everyone aspires for. We compare two cars form the Korean manufacturer which are one of the best sellers in their respective segments. Though they are different in body styling and appearance, many people fall into a dilemma about what to opt for. We try to solve this in our 2017 Hyundai Xcent vs 2017 Hyundai Elite i20 Comparison. Hyundai has improved the XCent 2017 and it now looks more like the Hyundai Verna than the Grand i10. The front grille now has horizontal chrome slats that add to the oomph factor. This is what makes it different from the Grand i10. The fascia isn’t anyway similar to the hatchback and hence this helps to differentiate it. There are projector headlamp and even daytime running LEDs, which will be near the fog lamps. The side profile remains the same like the outgoing version of the XCent. At the rear, there is a clear resemblance to other Hyundai sedans. The tail lamp design has been changed. This is what makes it stand out in the crowd and makes it look premium. The Hyundai Elite i20 2017 has been one of the best looking hatchbacks in the country. Its looks have been its USP and attracted many buyers. The Fluidic Design 2.0 in the Hyundai Elite i20 2017 makes it look fresh and premium in styling. Car buyers have picked up the Elite i20 mainly due to its styling. The aggressive look with the sleek front grille and the hexagonal lower grille are unique. The pulled back headlamps sleek and thicker towards the side. They extend upto the fenders. The large fog lamps are glamorous. From the side too the Hyundai Elite i20 2017 looks premium, specially with the blacked out door pillars. The alloy wheels are smart and contribute to the overall styling.

Interiors of the Hyundai XCent 2017 haven’t changed much. It still retains styling similar to the outgoing XCent. As the new Hyundai XCent is primarily a facelift not many changes can be made. The instrument panel layout is neat and convenient to use. The black and beige dash looks premium and there are minimal buttons, knobs or controls. A new 7-inch touchscreen system is on offer. This gets Android Auto, Apple CarPlay, reverse camera and even a mobile docking unit too. Then there is climate control, dual airbags and ABS with EBD on offer too.The boot space at 400+ litres is massive and sufficient to carry luggage for an entire weekend for five people.

The 2017 Hyundai Elite i20 has black and beige interiors but the high point is the look and feel of the plastics. The interiors feel plush due the top notch fit and finish. The instrument cluster has twin dials with multi information display. The graphics used in this information display is good, however there is no instantaneous mileage, average fuel efficiency or even distance to empty. The centre console looks amazing with the new touchscreen AVN system. It even has maps and even gets a reverse parking camera built in. Steering mounted audio controls and climate control are available on higher variants. Hyundai is now offering ABS and dual airbags across all variants, even though it is optional. The 2017 Hyundai Elite i20 has become an even better value for money package.

Hyundai XCent 2017 has a 1.2-litre petrol and 1.2-litre diesel engine on offer. Both come with a five-speed manual and the petrol has a four-speed automatic too. The petrol engine is highly refined and it has very low NVH (noise vibration and harshness). The power delivery is fairly linear and driving in city and even on the highway is comfortable.

The diesel engine is a new one and the 1.1-litre is discontinued from the new XCent. What it now offers is good torque, making driveability even better. The need to change gears in the city or on the highway is minimal. This is what makes the engine easy to drive, with no stress to overtake either. Where the XCent excels is the low NVH even on the diesel engine. What is somewhat prominent is the engine vibrations at idle engine speeds, but that too are well controlled for a 3-cylinder engine.

The Hyundai Elite i20 2017 comes with a 1.2-litre petrol engine that churns about 80bhp of power and 115Nm of maximum torque. The power of this engine is decent but it needs some amount of gear shifting especially when driving in city. This engine has strong performance at higher engine rpm, while in the mid range it is just fine. The petrol is available with a five-speed manual transmission. The second engine is the 1.4-litre U2 engine that produces 90bhp of power.

This oil burner is extremely powerful and this makes it a great option to consider. It is easily one of the best diesel engines around. One of the strong points of this engine is the low NVH, which is probably the best in its class of diesel engines. The performance is good and there is ample of torque once the engine crosses the 2000rpm mark. This comes mated to a  six-speed manual transmission.

The Xcent continues to have same ride and handling package as earlier, which is a good thing. The car has a pliant ride and good composure. The ride quality of the Hyundai Elite i20 2017 is good. On undulated roads it does the job by absorbing most of the road bumps. The Elite i20’s handling has been improved when compared to the previous generation. This is the best steering feel of any Hyundai so far. It feels a bit jittery at high speeds but it does well.

The compact sedan segment in India is popular because most people fancy a three box sedan. For a lay man, a hatchback, however big it might be, is still a ‘chhoti car’. However, the Elite i20 is infact bigger and more spacious than the Xcent. It also is more premium among the two and better built too. So if you dont mind buying a hatchback, the Elite i20 is the one you should go for. 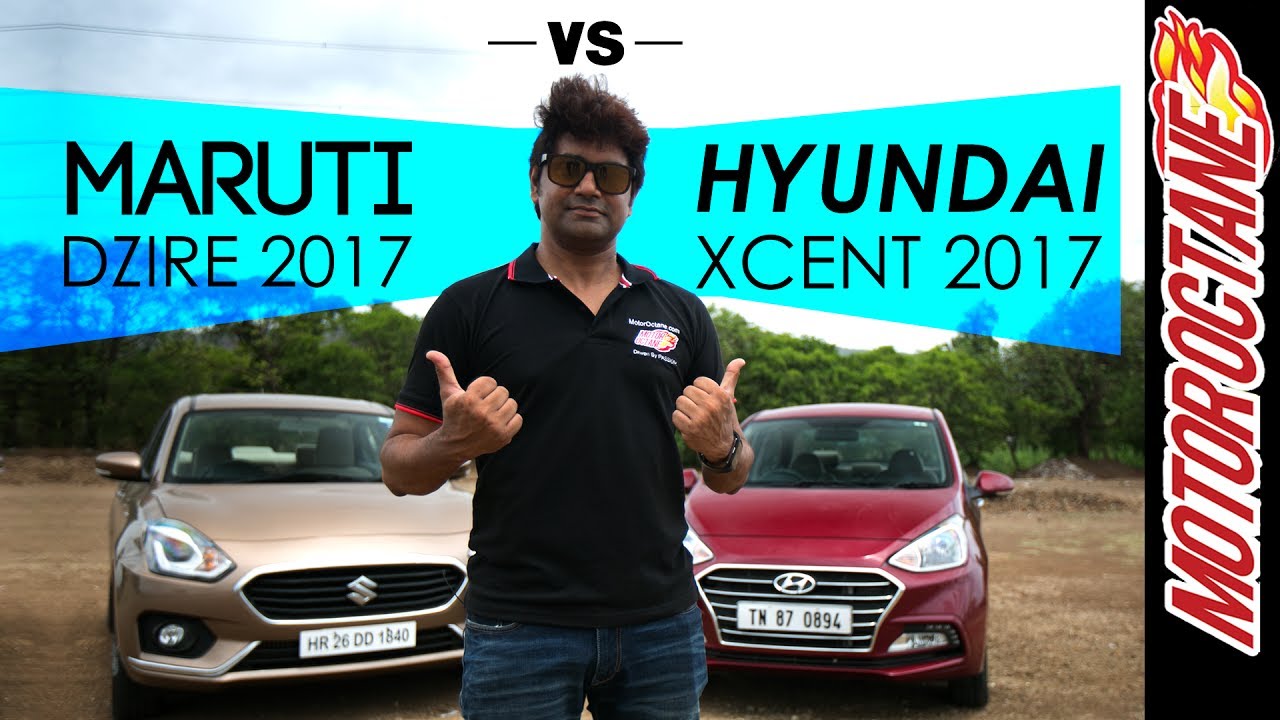