The 2017 Maruti Dzire has been launched recently. We pit it against another hot compact sedan which is the Ford Aspire. The New Dzire now has similar looks of the Aspire. The Maruti DZire is about 105 kilograms lighter than the outgoing version. But it is a lot more rigid than before. It has an increase in its wheelbase by 20mm and width by 40mm. This means better spacious and comfortable cabin. The Ford Aspire comes with a lot of panache. Its one of the best looking compact sedans. It is contemporary in terms of design, features and also performance. Which one is better? Let’s find out in the Maruti Dzire vs Ford Figo comparison. The new Maruti DZire has undergone some major changes. It gets a new platform, which is Suzuki’s Heartect and is shared with the Baleno. The new platform is modular and is easily flexible. The boot seems better integrated now. It doesn’t look like a forced job anymore. It is proportionate this time. The rear is also more attractive now.

The Ford Figo Aspire is a very good looking car. It based on Ford’s Kinetic Design 2.0. The bonnet or boot are neither too long nor short. The car is also well balanced and not too tall. The boot design too is good with a chrome strip that is well proportionate. Its not too flashy not too thin. The car looks premium even from the rear. There is an uncanny similarity of design between the two cars

The Dzire is now more spacious than the earlier model. There is an increase in the shoulder room as the car’s width has been increased. The black and beige dash board looks stylish and offers good fit and finish. The quality of the materials used on the inside are good enough. The quality of materials used is much better than before. The fit and finish of the interior is good. The materials look a lot more premium than the outgoing version. 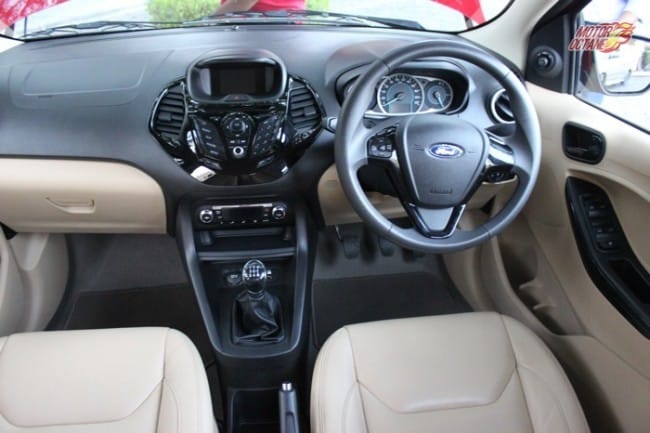 The cabin of the Ford Aspire has a neat layout with nothing out of place. The instrument panel is well laid-out with the steering wheel and ft has a flowing centre console. The interiors feel solidly built.

The Ford Figo Aspire has good overall space management. The front row is very spacious. The second row seats are comfortable for two people only. The third will be a bit of squeeze as the central tunnel is raised and there is no headrest for the middle passenger. The cooling from the AC was decent in the Udaipur heat, but the rear AC vents were missed. With a boot capacity of 359 litres, the Ford Figo Aspire provides decent luggage carrying capacity.

The Maruti Dzire is a feature loaded car. The top end Z variant gets engine push start and stop, smart key for keyless entry, automatic climate control, electrically folding mirrors and driver’s side window auto up and down. The Ford Aspire gets a mobile docking system on the stop variant.The other variants get the regular music system.The Sync has Bluetooth connectivity with audio streaming. It also has medical assistance where the car automatically calls the emergency number in case of an accident. There is automatic climate control and electrically folding ORVMs.

Featurewise, the Dzire is clearly richer as compared to the Aspire.

The new DZire still has the same 1.2-litre K-series, four-cylinder engine that churns about 83bhp of power and 115Nm of peak torque. There is more than sufficient power in this engine to drive in comfort and overtake as well. The AMT on this engine is amazing as there is minimal lag and it is responsive. There are three engines to choose from in the Ford Figo Aspire. First is the 1.2-litre petrol that churns out 87 bhp of power and 112Nm and comes mated to a five-speed manual transmission. This engine is ideal for city driving. The punch from the engine comes after 3000rpm and keep it above that if you want to extract the best performance.

The Ford Figo Aspire’s second engine is the 1.5-litre petrol. This engine comes only with a six-speed DCT (dual clutch transmission). Simply put, it is a high-end automatic transmission. This is quite a powerful engine and is fun to drive in a spirited fashion. It is very responsive too.

The third engine is the 1.5-litre diesel that produces 98bhp of power and 215Nm of torque. This engine of the Ford Figo Aspire has been tuned for better performance, however, there is still some amount of turbo lag. This is the best engine of the lot.

The Maruti Dzire is the latest car in this segment and obviously comes loaded with more number of feature per se. With a fresh new look and architecture it is a much improved car too. The Ford Aspire has been around for a couple of years and established itself as a worthy competitor to the best selling Dzire.

If your commute is mainly in the city and you wanna opt for a petrol car, the choice is undoubtedly the Maruti Dzire, as it has a frugal petrol engine with an AMT option as well. However, if you travel more often on the highway and are looking at a powerful diesel car with decent features and class leading ride and handling, you can never go wrong with the Ford Aspire diesel. 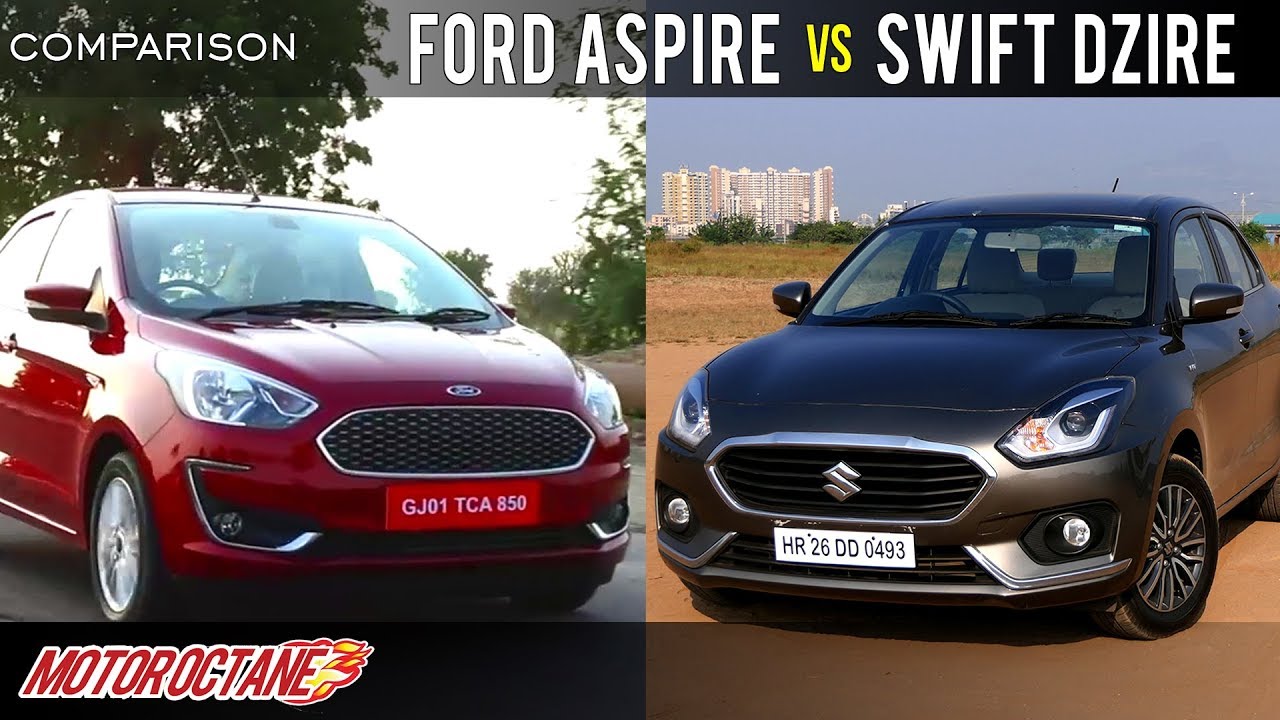