The new-generation DZire is here, and the old one has been around for about 5 years now. The DZire 2016 will now be moving into the taxi segment and it will be sold as the new DZire Tour. But then, there is curiosity for many to understand if they should upgrade to the new DZire or should they continue with the current one. Well, if you are confused on buying or upgrading to the new DZire, we will help you understand the reasons and guide you to buy the correct sedan. Read further to know more about the Maruti DZire 2017 vs Maruti DZire 2016 Comparison.

To begin with, the new DZire 2017 does look so much more sleek and stylish. The new sedan does look a lot more proportionate than before. Then there is also the appealing design that makes it look premium. The DZire 2016 has a short boot, which makes it look odd. The new DZire is wider and has a longer wheelbase too (just by 20mm). The ground clearance has seen a reduction of just 7mm. Then after that, the DZire now has a boot that is finally 376 litres, which is a good 50-60 litres more than what the DZire 2016 had on offer. 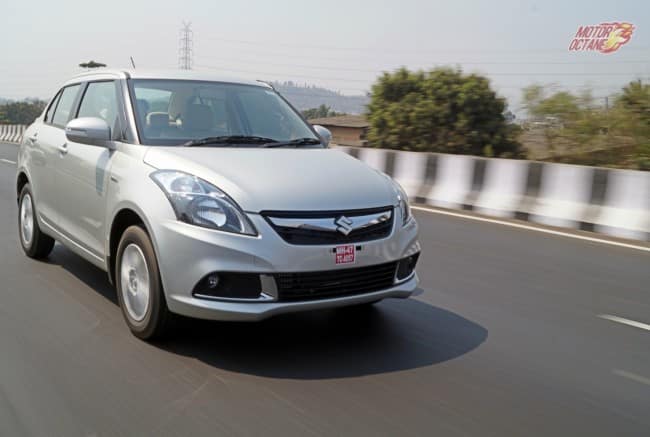 The new one, has diamond-cut alloy wheels. The sedan does look stylish and then there are projector headlamps and daytime running LEDs. The old DZire was filled with a lot of chrome on it, and the new one seems to be a lot more subtle. This is where it feels better. Even the paint quality on the new DZire is a lot better. Generally design is subjective but here the new sedan is anyday better in quality when compared to the outgoing version.

There is a sea of change on the inside. The new DZire has  so many extra features on offer, while the outgoing version of the DZire doesn’t match to the quality it offers. The interior quality, the space, features, fit and finish everything of the new DZire is just better. Everything on the new DZire is better. The front seats are larger and offer better thigh, back and side support. At the same time, the rear seats are more spacious offering generous knee room compared to the outgoing sedan. There are rear AC vents and even a 12V charging socket.

The additional features on offer on the new DZire include a touchscreen system with Apple CarPlay and Android Auto. There is reverse camera and auto headlamps also. The other features on offer include the new keyless entry, reverse sensors, bluetooth, USB and aux connectivity as well. Both the engines on offer are the same, with the same power and torque. The difference is that as the new DZire is lighter by about 60-70 kilograms, it has better performance and mileage too. One difference is the the four-speed automatic on petrol is replaced by a five-speed AMT. So, both petrol and diesel come with a five-speed manual and the other option is a five-speed AMT. These are the two options on the DZire. The DZire even has good mileage, even better than the previous one. A 10-15% jump in its mileage due to lighter body weight. There is a jump of about INR 15,000 to INR 20,000 on the same variants. However, this time there is dual airbags and ABS as a standard feature. This is what makes it a good value for money buy. The new Z+ variant is for sure a lot more expensive and it costs about INR 1 lakh over the existing Z variant.